That Window in the System Tray

You are here: Home » Web Solutions Blog » That Window in the System Tray

What is that little square windows icon in the corner? Where did it come from and why isn’t it going away?

Microsoft is going to release Windows 10 in the near future. Since they want everyone to upgrade, they are using that square in the system tray – that icon – a notice to get people to ‘reserve a copy’ in advance. If you click on the icon it will walk you through the ‘reservation’ and Microsoft will let you know when Windows 10 is available. They released the icon with the last Windows upgrade.

When does it come out?

How much does it cost?

Windows 10 is going to be free to Windows 7 and 8 users choosing to upgrade within the first year. From there Microsoft has not been very clear on what happens. There will also be a few different versions for Phone, tablets, and higher end users.

Why is there no Windows 9?

The joke is that 7 ate 9? Every second version of Windows is not so good so they just skipped one? Seriously though, there is a lot of ambiguity there and nobody has had a very good answer.

How is Windows 10 different?

I have not used it myself, but from what I understand it is said to have a lot of the good points of 7 and 8. People were not big on the tiles for Windows and were angry the start menu went away. The start menu comes back for Windows 10 (though they still keep some of the tile use.) If anything it should be an easier jump than from 7 to 8. 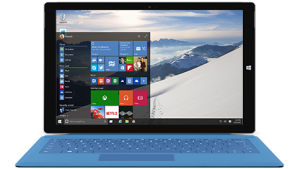 Will my old computer handle it?

It is said that it is supposed to be lighter-weight and easier on resources than 8 or 7, so it should play nice with even that old laptop sitting on the shelf.

Is it going to be good or bad?

A lot of people who have used the demo version are pleasantly surprised and say it is an improvement over 8. I am definitely going to upgrade my Windows 8 machine to try it out.

Internet explorer is going away. They haven’t said what the new browser is yet, but the code name is ‘Spartan.’