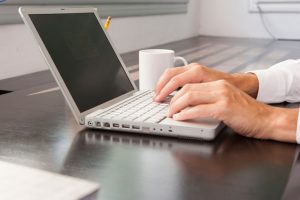 It’s almost Christmas, so let’s talk tech toys. If you’ve been really good this year you may be asking for a new laptop. The first thing you’ll have to decide when contemplating your Christmas list is which operating system do you want or need? Windows? Mac? Chrome? Straight up Linux? Let’s look at the choices outlined in our laptop buyers guide for 2016.

After approximately 27 years, Apple is finally giving us a new MacBook Pro. First off, it is lighter, although this is something Macbooks have already been known for. Its huge touch pad and super cool touch bar are the real winning upgrades in this new edition. The touch bar becomes your browser toolbar while browsing, your emoji palette while messaging, and an intuitive toolbar while using applications.

As is to be expected with Apple, the display has also been improved, boasting a brighter display capable of more color clarity than ever before.

The only complaint we’re hearing about the new Macbook Pro so far is that its popular MagSafe charger has been replaced by a Thunderbolt 3 powered USB-C port. Actually, any of its new Thunderbolt ports can be used for charging. These ports are also capable of transfer speeds of up to 40Gbps. This is great, but now if someone trips over your power adapter, the cable will no longer safely release as it would have with the MagSafe system. Instead, your shiny new laptop will likely be sent flying across the room. Apple’s habit of changing port standards every year or so has also produced a significant number of eye-rolls from those of us who’ve been through this a few times already.

Chromebooks are only recommended for people who have constant internet access because everything in Chrome OS is cloud based. This is the reason why they come with minimal storage. Cloud based computing with Chrome does have its advantages. You don’t need to worry about losing everything in case of a coffee spill, the hardware is generally cheaper, and the operating system is lightning fast at what it does (which is basically anything you can do in the Chrome browser). Chromebooks can also integrate with your Android phone.

Keep in mind, however, that your data will be inexorably tied to your Google account and may only be accessed when you are within range of a Wi-Fi connection. Chromebooks are not very good machines for artists – they lack the in-depth artistic features and high resolution displays of their competitors. Chromebooks are much better suited to daily business users who need to write email and cruise the internet – those users will appreciate a long battery life.

Technically, the Surface Pro 4 is a tablet. It can’t really be compared directly with a Macbook Pro, but with so many people replacing their laptops with Surface Pros (sales are up almost 40% since last year) and the screen reaching 12.3 inches, it has entered the ring as a solid laptop competitor. To give you that laptop feeling, there are even improved type-covers available which boast more “laptop-like” keyboards. However, we are hearing complaints that the battery life has not been improved.

Artists and designers are turning to the Surface Pro because of its extremely high resolution. That in tandem with its new Surface Pen allows the screen to detect 1,024 levels of pressure. In some ways, this even outpaces Wacom’s Companion 2, which is specifically designed for creating art (and little else).

If you already own an Apple-branded laptop, Microsoft has an offer for you. They will give you up to $650 to part ways with your Mac as long as you’re spending that money on a new Surface Pro 4 or a Surface Book. Microsoft’s “trade in and trade up” program is also in full force for trading iPads for tablets and even phone trade ins. See the Trade-In and Trade Up website.

The majority of laptops on the market are Windows-based. These laptops come from all sorts of brands with a wide range of features. Although they vary greatly, these laptops generally have one thing in common: they are thicker and heavier than tablets. If you run demanding software requiring lots of RAM or hard drive space, traditional laptops will be a better choice. Still, you may wish to consider upgrading your Windows based laptop to the Linux operating system if you have concerns about your data’s security.

Users who have become frustrated with Windows’ lack of privacy and Macbooks’ lack of RAM are turning to Linux laptops. These laptops are usually a little more costly. They aren’t as sleek as the Macbook or Surface Pro, but they offer the stability and open architecture of Linux. Those of us with an IT background have the advantage of buying almost any beefed-up laptop and installing Linux. If you’re concerned about not being able to use some of your favorite software such as Microsoft Office, there are programs available which enable you to use Windows software in Linux. There are also thousands of programs and apps available for Linux free of charge.